or
Please check your e-mail for a link to activate your account. 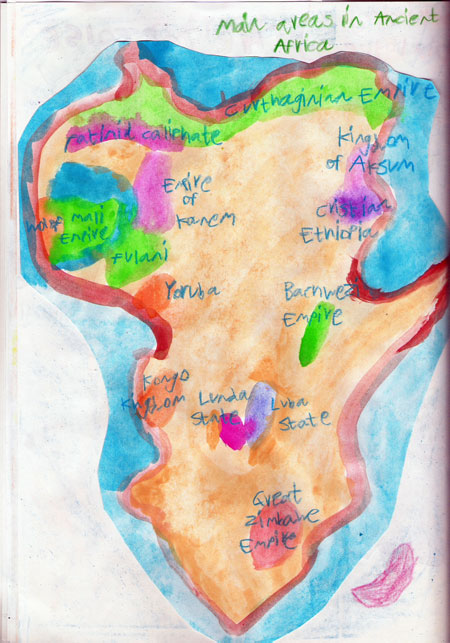 Identification as white is a logical choice for many Latinos/Hispanics. After all, Africa continues to be disparaged as a continent and portrayed as backwards and inferior to other regions of the world. The effects of 200 years of brainwashing are terrible in their profound and pervasive efficacy. When given the choice between identifying with a region considered to be backwards, and disease- and war-ridden, and a region thought to be illustrative of what is civilized and good, it is small wonder that many Latinos (and  people of African descent overall) would choose affinity to Europe and almost any other cultural origin) over Africa (“I ain’t black, I’m Indian”).

Not a lot has changed since Kenneth and Mamie Clarks' doll experiments conducted between 1939 and 1940 on children's self-perception related to race (http://en.wikipedia.org/wiki/Kenneth_and_Mamie_Clark#Doll_experiments). The doll experiment involved a child being presented with two dolls. Both of these dolls were completely identical except for the skin and hair color. One doll was white with straight yellow hair, while the other was brown with curly hair. The child was then asked questions about which one is the doll they would play with, which one is the nice doll, which one looks bad, which one has the nicer color, etc. The experiment showed a clear preference for the white doll among all children in the study. These findings exposed internalized racism in African-American children, and self-hatred that was more acute among children attending segregated schools. The study was replicated with Dominican children, with much the same result (http://www.huffingtonpost.com/claudio-e-cabrera/dominican-colorism_b_3900808.html).

Negative attitudes toward Africa and black people have not always been so widely held. Prior to the 19th century, African and European states interacted as equals, with examples of exchanges of diplomatic missions and intricate trade and political relations. There is a long and well-documented history of relationships based on respect and European admiration for Africa. A few examples are Nile Valley Civilizations in the North, the Empires of Ghana, Mali and Songhay in the West, and Swahili city states and Great Zimbabwe in the East. What is important to stress is that the campaign against Africa grew out of economic interests of Europeans and the need to justify the subjugation of Africa and enslavement of its people. How can a Christian nation justify plunder, rape and enslavement? By dehumanizing the people . Thus, the campaign was launched to show that Africa was a “Dark Continent” and it was the responsibility of Europe to bring civilization (and religion). This is ironic since what Europeans actually brought with them was death, destruction, disease, exploitation and a holocaust unparalleled in the annals of human history.

All this matters. A person of African descent, with visible African features, who disparages and denies a cultural connection to Africa in fact denies an integral part of his or her identity. This cannot be psychologically healthy. Telling phrases have leapt into our vernacular, such as “bad hair,” “good hair,’ “suspicious hair,” grandmother in the closet,” etc. Dark skinned people in Latin America (and Africa) spend millions of dollars each year on skin bleaching products. Black people in Latin America and North America often decry any connection to Africa.

Fortunately, there is a counter to the pathology of self-hate. Thousands of Latinos and others of African descent have worked hard to destroy the negative stereotypes that have been inculcated through popular media, and our education system. Arturo Schomburg, Marta Moreno Vega, and Pedro Noguera are among these champions.

The International Youth Leadership Institute (iyli.org) makes it possible for African American and Latino high school students to study and travel in Africa. Through these experiences students begin to overcome the stereotypes they have held about Africa. Before departure, when asked what they think about Africa, many of the students convey what they have learned – animals walking around, lack of roads and permanent buildings, war, disease, hunger.  When they travel, meet the people, break bread together and interact on a one-to-one basis, they begin to see the insidious nature of the lies. They begin to recognize what is valuable and vibrant about African cultures – lessons that we can benefit from today. We have to do more to expose our children to the truth. Let’s decide not to make it the public education system’s responsibility!

In the book, "Writing for Your Life: Discovering the Story of Your Life’s Journey", Deena Metzger writes "self discovery is more than gathering information about oneself. In the process of... discovering our story, we restore those parts of ourselves that have been scattered, hidden, suppressed, denied, distorted, forbidden, and we come to understand that stories heal."  (1992, HarperOne)

"A people's historical consciousness, once liberated and energized, is a sure driving force in the human struggle for life."

It was the dawn of my teenage years and mom decided to ship me off to rural Ohio for the summer. I went alone though I was the middle of three sons. My oldest brother refused to go. The other was too young.

After growing up in Cleveland, Chicago, Detroit and Buffalo, the small town culture was quite a culture shock. Looking back on that time, I realize that it was, in effect, a reintroduction to African culture.

Like the majority of African Americans throughout the U.S., I experienced African culture everyday of my life, though like most I was unaware of it. In fact, growing up, how would I even know that many of the cultural aspects of daily life had a strong foundation in Africa despite being obscured by repression, time and geography.

Some of these aspects included the prevalence of an extended family, material solidarity (economic reliance on one another), idealism and optimism (even in the face of daunting social, political and economic oppression), and language (Black talk derives in part from the adaptation of English to African languages and pronunciation, morphology and syntax).

The first day I arrived in rural Ohio, I took a walk around the area close to my relatives’ small house. I remember the expansive, grassy fields, abundance of trees, and quiet. Houses had lots of land between them. When I passed the first house, someone shouted out from the porch, “Where you going, boy?” When I continued to walk past without a reply, the speaker chastised me, saying “You too good to speak?” During my walk, some form of greeting emanated from nearly every porch or doorway. Not wanting to evoke the ire of the speaker, I learned quickly to respond. Many people followed up their greeting with questions about my well being and that of my family. I felt as though people knew I was coming and were waiting for me. The walk turned out to be a lot longer than I could have imagined.

That summer I experienced dynamics that I would encounter many years later when I first visited Africa and lived in a rural community in Northern Nigeria. I have subsequently revisited those experiences in many African communities, in addition to the Caribbean and rural U.S. South. The expectation of extensive social interaction and engagement, even with strangers, is a strong, African cultural trait. African people engage in extended greetings that encompass inquiries about family and well-being. I am often reminded that visiting African communities, especially in rural areas, is very much like visiting down south.

Cheikh Anta Diop, one of the greatest scholars and intellectuals of the twentieth century, wrote a book, The Cultural Unity of Africa. In it, he described the cultural paradigms that distinguish African culture from the Mediterranean to the Cape of Good Hope. Diop asserted that the African peoples shared a common set of cultural characteristics, among them language roots, and patterns of social relationships.

African cultures are diverse and reflect the vastness of the continent, requiring us to exercise considerable restraint when making generalizations or stereotypes. The same applies when discussing the impact of African cultural traditions on the people of the African Diaspora, including North, Central and South America, and the Caribbean.

However, when Africans were enslaved and brought to this hemisphere, they didn’t suddenly lose their cultures, including language. They adapted to survive. The cultures did not die but evolved, often in subtle ways, and took on new manifestations that are still reflected in our communities today. We can see the vestiges of this evolution in extended family, the prevalence of fictive kin (play cousins, uncles and aunties not related by blood), economic co-dependency, language (such as Gullah and Creole, and what some scholars call Ebonics and others African American Vernacular English), patterns of behavior (rap as an easy and natural reflection of one’s standing out as an individual but within the context of the group; call and response reflected in church and spiritual music).

Segregation, whether voluntary or involuntary has been (and is) the engine that has sustained these influences over time, though the origins of African American culture may have been forgotten.

Diop’s work has raised a good deal of controversy, both during his lifetime and up to the present. The ideas espoused by Diop about African cultural unity are relevant today, especially in light of the constant assaults on the integrity of African cultures and efforts to denigrate Africa and reduce the important role that the continent continues to play.

International Youth Leadership Institute (IYLI) promotes travel and study for African American and Latino youth. Since 1990, IYLI has conducted nearly 50 programs in 17 countries in Africa, Caribbean, and Latin and South America. In addition to exposure to other countries and cultures, these programs celebrate the African Diaspora and the common bonds that connect us as people of African descent.

Through enslavement our cultural identity as people of African descent has been severely damaged. Though frayed, the connection has not been broken and today many of us embrace our heritage as a vital wellspring and source of inspiration to overcome the centuries of brutality, abuse and degradation that our people have endured in the Caribbean and Latin, North and South America.

The assault against Africa has been no less intense.  Dubbed the Dark Continent Africa has been systematically portrayed in print and electronic media as the source of bad things and not for Africa’s glorious contributions to the human story throughout the ages.

When I was 8 or 9, my Sunday school teacher told me, “Africans living in the jungle cannot enter the Kingdom of Heaven unless they have been baptized.” Images of the popular television show Tarzan filled my mind and I could envision an endless procession of Africans headed toward the gates of Hell. Even at that young age, I knew that there was something terribly wrong about what she had said. Over the years I heard echoes of her words in the portrayal of Africa on television, in books, in magazines and newspapers.

I hear those echoes today.

IYLI conducts a workshop, Let’s Combat Stereotypes About Africa,” for African American and Latino high school students preparing to travel to Africa to study in our summer programs. We begin by asking a question, “When you hear the word, Africa, what’s the first thing that comes to your mind? Sadly, the responses haven’t changed much over the last 25 years (although ebola has been added to the mix): war, disease, AIDS, jungle, animals.

As people of African descent, the popular devaluation of Africa is a key factor in the formation of our identity.  Often we do not embrace our inherent power and beauty and look instead to European derived cultural ideals. When we devalue our African culture and heritage there is a negative effect on the way we see ourselves and each other.

IYLI creates opportunities for face to face interactions among African American and Latino youth and their counterparts throughout the African Diaspora to dispel negative stereotypes, build consciousness and cultural awareness, and learn from each other how to apply more holistic and global perspectives to our community challenges.

That’s why we are here, why we return and why Africa. Our culture, our heritage, our legacy.