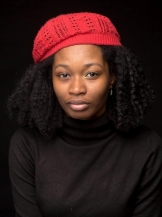 Jadayah Spencer is the Executive Director of the International Youth Leadership Institute. She is an advocate for improving access to opportunities that enhance the lives of youth, people of African descent, and indigenous people worldwide.

A proud IYLI alumna, Jadayah became an IYLI fellow in 2010 and traveled on the 2011 Summer Fellowship Program to Tanzania. She subsequently served in various roles, including being an IYLI volunteer, an IYLI board member, and an IYLI group leader (Brazil SFP 2013).

She serves on several international and local boards, including her work as a Co-Chair of the UN DPI/NGO Youth Representative Steering Committee, and on the New York City Young Women’s Advisory Council which addresses policy issues that directly affect young women of color in New York City.

Jadayah started her undergraduate education at age 16 as a Deans Scholar at New York University, where she majored in anthropology and double-minored in Social Entrepreneurship and Mandarin Chinese. Jadayah is a born-and-raised Brooklynite, and recipient of several fellowships including StartingBloc, and has been recognized as one of 40 Under 40 Rising Stars in the NYC Non-Profit Sector by New York Nonprofit Media. She loves world travel, meaningful conversations, and dissecting rap lyrics.